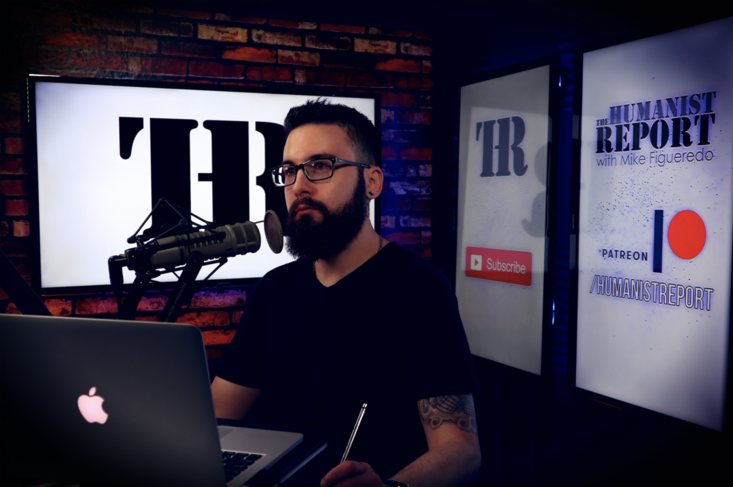 During the 2016 presidential campaign, Mike became a prominent supporter of Senator Bernie Sanders, which is when The Humanist Report attracted thousands of like-minded progressives that sought more information about the Vermont Senator’s campaign. After the 2016 election concluded, Mike began focusing heavily on policies like ‘Medicare for All’ in 2017 and became known for his frequent calls to members of congress in a strategy he referred to as “naming and shaming” on the show.

Towards the end of 2017, Mike became one of—if not the most—influential voices in the net neutrality debate, garnering millions of views for his coverage of the topic, with multiple videos on the subject matter going viral weekly. He even managed to make it on the radar of FCC Chairman Ajit Pai, who played a clip of Mike calling a Republican GOP commissioner a “sellout” at a private event with regulators and industry insiders.

Mike continues to focus on policies like ‘Medicare for All’ and net neutrality, but has recently began focusing more heavily on the 2020 elections by profiling progressive primary challengers to incumbent, centrist Democrats and following Bernie Sanders' presidential campaign once again. Mike has also been an opponent to President Trump’s militarism, shining a spotlight on neoconservatives aiming to influence his foreign policy decisions with respect to Syria, Iran, and North Korea. He also frequently calls out President Trump’s “war on the poor” and criticizes his use of trickle down economics.

Mike’s non-political interests include videogames and podcasts. He married his long-time partner in 2017, has a dog and a cat, seventeen nieces and nephews, and is writing a book about American politics that will focus on issues broadly discussed on The Humanist Report.

Mike Figueredo is a 32-year-old self-proclaimed activist and political aficionado. He obtained both his Bachelor’s and Master’s degrees in political science and began pursuing a Ph.D in public policy, but put that on hold to dedicate more of his time to The Humanist Report podcast. Throughout the course of his academic career, Mike focused on American and comparative politics, international affairs as well as U.S. foreign policy, and Middle East and North African social movements. His current interests encompass a broad spectrum of topics, ranging from American electoral politics and campaign finance laws to political philosophy. Additionally, Mike is an outspoken atheist, is openly gay, and considers himself an anti-establishment, politically independent democratic socialist. ​